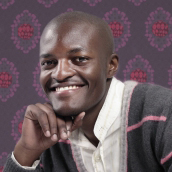 But that is exactly what happened to Laduma Ngxokolo, a young man from the Xhosa ethnic group, whose colourful range of knitwear had lit up the catwalk.

Laduma is the founder and creator of MaXhosa by Laduma.

Born in 1986, he was taught by his mother how to use a knitting machine.

The design range showcased in Johannesburg was conceptualised as a project titled The Colourful World of the Xhosa Culture while Ladume was studying textile design and technology at the Nelson Mandela Metropolitan University in Port Elizabeth. 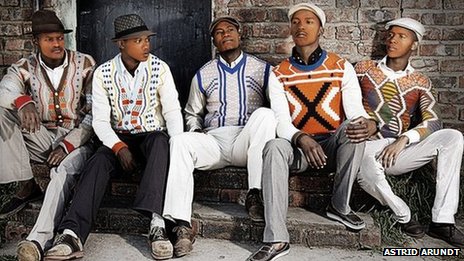 Laduma's clothes are based on traditional Xhosa designs.

In 2010 his project won the South African Society of Dyers and Colourists' design competition, earning him a trip to London where he was awarded first prize in an international competition.

The BBC's business teams across Africa meet the continent's entrepreneurs who are starting up new enterprises and seeking to create big opportunities.

"I decided to develop a Xhosa-inspired collection of knitwear using traditional Xhosa beadwork, colours and motifs.”

"I decided to call the name of my brand MaXhosa by Laduma because I wanted to showcase the astonishing beauty of the Xhosa people and translate it in a modern way that actually appeals to the current youth that is influenced by international trends."

His success turns decades of what some see as cultural imperialism on its head.

"European designers like Missoni and Jean-Paul Gaultier have often taken inspiration from African tribes and sold it around the world," says Siphiwe Mpye, a journalist and former assistant editor of GQ, South Africa who hails from the same area as Laduma.

Now Mr Mpye says the attitude of African designers is: "If we don't do it someone is going to come and appropriate it and make loads of money from it, so we might as well do it ourselves and be authentic about it and treat it with the integrity it deserves." 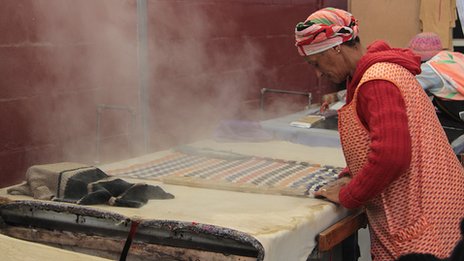 After seeing the growth and potential of his business, Laduma decided to relocate from Port Elizabeth to Cape Town, where he found a knitwear producer that could handle the capacity he needed.

"It was a good market to actually establish my brand because there was already a demand in the city and I could get more publicity in Cape Town as well," he says.

In Cape Town, Laduma met Jacques Burthy from Vuya Fashions who bought into his vision for MaXhosa and began producing garments for him from his factory.

Now Laduma spends most of his time at the factory checking on production and creating new designs. 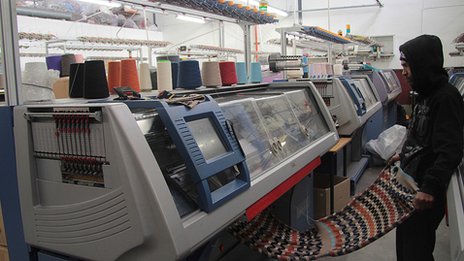 The garments are made using traditional materials and with modern machinery.

MaXhosa's garments are made in South Africa and use local raw materials such as mohair that he sources from his hometown in Port Elizabeth.

He has already branched out into other areas like carpets and cushions, by working with new partners.

As his business expands, Laduma admits there is a need to get more investment but this is something he is prepared to set aside for now as he fears it may compromise the brand he is still building.

One such decision was to turn down an offer from a large South African retailer to form a partnership with him to sell his garments.

"I make 100% sure that whichever decision I make won't actually affect the work that I have already done because it was not easy to get here and a wrong decision could take us 10 steps back. I'm trying to take cautious steps as I go forward," he says. 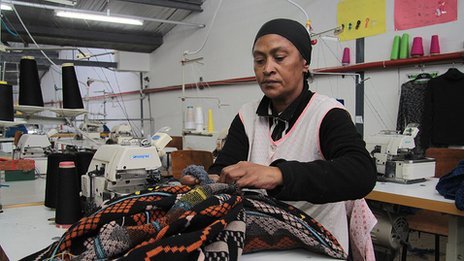 While most of his sales have been from the shop Merchants on Long on Long Street in Cape Town, Laduma has launched his own online store to increase sales. But he is quick to admit that it is not as easy as he thought it would be.

"It is sort of a physical store that is up in the air. You have to control it, so I had to get in a few more people to be involved to actually help me manage," he says.

"It's a great platform for us because we get to connect directly with our customers and service them the way that we feel is best for us."

One of those helping him in his business is his sister Tina, who is also a fashion designer.

As Laduma seeks to grow his local market he is already attracting attention on the international fashion scene.

He has showcased his work in Berlin, London, New York and Paris, and in May, he was one of the speakers at an international conference in Amsterdam, called What Design Can Do, which looks at the power of design as an agent for social renewal.

But whatever success he garners around the world, Laduma will always remain true to his roots.

He says his ultimate goal is to establish MaXhosa by Laduma as an international premium brand - proudly made in South Africa.

Born in Port Elizabeth in 1986, Laduma Ngxokolo had his first hands-on experience of textile designing in 2003 when he studied at Lawson Brown High School. Ngxokolo’s flair for knitwear design earned him a bursary from both Port Elizabeth-based Cape Wools South Africa and Mohair South Africa during his Btech studies at Nelson Mandela Metropolitan University in 2010. The same year Ngxokolo won the South African national leg of the South African Society of Dyers and Colourists (SDC) Design Competition, which earned him a trip to London where he was awarded first prize internationally for the competition. The title of his competition entry was “The Colourful World of the Xhosa Culture” that consisted of men’s knitwear that is inspired by traditional Xhosa beadwork.